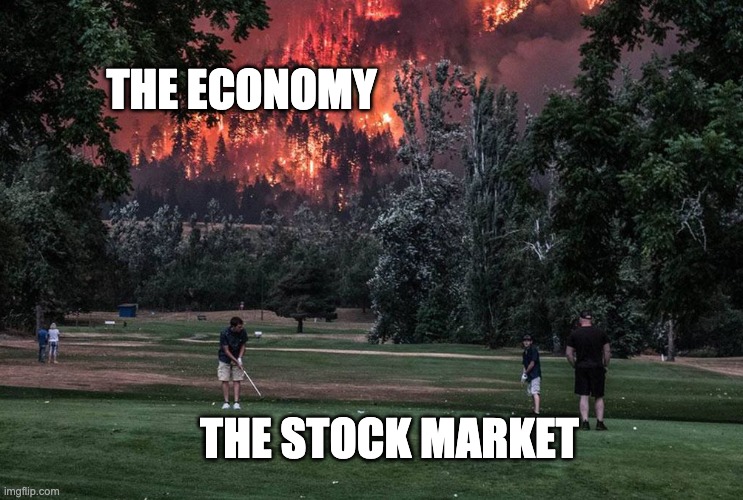 If you were to tell me in October of 2019 that 5 months into 2020 we would see: a virus spread across the globe that practically shuts down the economy, millions of Americans working and learning from home for months on end, a potential invasion of an Asian wasp species that's so big it's called the 'Murder Hornet,' and on top of all this a stock market that's trading at the same exact level then as it is now, I'd say you're crazy.

Well, here we are.

Despite all the bad news, the market has been fairly resilient, and many are asking: how can that be?

At the height of the 2008/2009 financial crisis, the most jobs lost in a single month was ~800,000, the unemployment rate peaked at 10%, and from peak to trough the stock market sold off 50%. With worse economic data this time around, shouldn't we see a steeper decline in stocks this time around too?

How can the NASDAQ 100 be positive year to date (+3.2%) when the economic outlook is so bleak?

Is the stock market disconnected from reality?

There will never be a definitive answer to these questions, but that's not stopping investors from trying to make sense of the market moves. Here are some of the most often cited reasons behind the market's recent rally.

1. The intervention by the Federal Reserve was swift and wide-reaching. So much so that in the past 8 weeks the Fed has injected more liquidity into the system than they did in the entire year following the collapse of Lehman Brothers. The ample liquidity provided by the Fed means credit markets are still functioning, which means struggling companies can raise debt and ride out this pandemic rather than file for bankruptcy.

2. The fiscal response from Congress is big, and will likely get bigger. It's so big in fact that a recent note from Goldman Sachs' top economist Jan Hatzius estimates that total personal disposable income will actually rise slightly in 2020, as expansion to unemployment benefits are robust enough to account for the recent job losses. However, the estimate is predicated on another $450 billion relief package from Congress being passed.

3. Some companies were born for this. Large cap technology companies in particular have held up well during the coronavirus pandemic, and some are even thriving. Companies like Amazon, Microsoft, Netflix, and Google are seeing a surge in business as consumers are stuck at home and more engaged with their screens than ever. When you look underneath the market hood, there is plenty of carnage. Oil, airlines, cruise lines, hotel, and travel sector stocks are down upwards of 60%. But since large cap technology stocks make up a bulk of the index, those losses are harder to see.

4. TINA aka There Is No Alternative. With bond yields sitting near zero (and under zero in parts of Europe) where else can you put your money and expect a decent return? If you have a long enough time horizon, the only answer seems to be stocks.

5. A vaccine or treatment that proves effective against the coronavirus might be here sooner than most expect. For starters, Gilead's remdesivir has seen positive results in an ongoing trial (shortened length of recovery by a few days) and the FDA recently granted the drug emergency use authorizaton so any COVID-19 patient can be treated.

Despite these bullish perspectives, the risk to the downside seems hard to avoid: whether it's a second wave of the virus that shuts down the economy again, or a weakened consumer that takes years to recover to pre-virus spending levels, risk is no doubt lurking right around the corner, as it always is.

But at the end of the day, the market doesn't owe anyone a reason for why, where, or when it goes where it goes.

Often the stock market does the exact opposite of what most people think it will do, and with investors most bearish on stocks since April of 2013, don't be surprised if the market keeps grinding higher in the face of more bad news.

At Ithaca Wealth Management, we work closely with our clients to set them up for success, independent of an up or down market environment. From ensuring that you are invested in a stock/bond portfolio mix that matches your risk tolerance, time horizon, and investment objective, to constructing a bottoms up portfolio of high quality companies that have strong growth prospects and a solid balance sheet, we've got you covered. Interested in learning more? Give us a call at (607) 882-1434.‍

It can be hard to visualize just how big a 20.5 million job loss print is. Here's some help from NYTimes.

Do you know someone you think would benefit from our low-fees, $0 account minimums, and investment management services? We'd love to help! Click the button below to refer a friend or family member.

Alabama, Arizona, Arkansas, Indiana, Kentucky, Mississippi, New Hampshire and Ohio will be easing their lockdown restrictions this week, allowing various types of businesses to reopen. We'll be keeping an eye on these states and their respective daily new coronavirus cases tally. Any substantial spike in new cases after a state has reopened could be the first domino to fall in another round of shutdowns.

Everyday the TSA publishes the number of people they process at their security checkpoints in airports across the country. With air traffic down 90% year over year, a bottom and rebound would be welcome news. For now, it looks like a bottom is in, and a rebound could be picking up steam: on Friday, 215,000 people hopped on a plane, the highest amount since late March. ‍

There are just two episodes left of ESPN's Michael Jordan documentary 'The Last Dance,' so if you haven't already, do yourself a favor and catch up before next Sunday's finale. Whether you like basketball or not, the story is absolutely mesmerizing, showing that true grit, hard work, and determination can take you anywhere you want to go in life.

Stay safe and all the best,