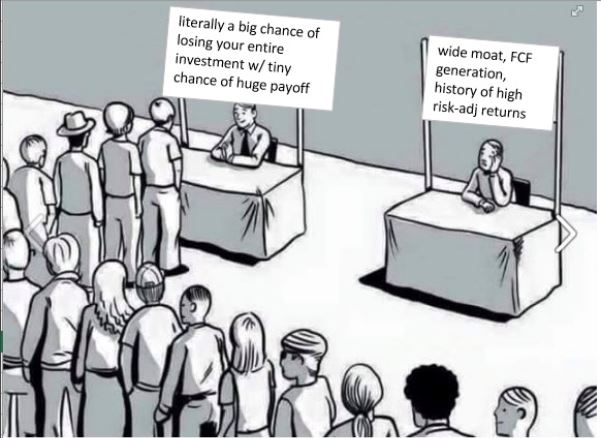 Is The Stock Market In A Bubble?

The S&P 500 is up 5% so far this year and already there is heightened speculation among investors that the stock market is in a bubble.

The question has been debated on the front page of investment magazines and among legendary investors on CNBC and Bloomberg as the market continues to defy expectations and rally despite a global pandemic.

A flood of IPOs (and SPACs), sky-high tech valuations, and wild trading moves in a select group of stocks are often cited as similarities between the 2000 dot-com bubble and today.

But there are big differences between now and then.

For one, the tech darlings of today, unlike in 2000, are profitable and growing fast. Both Apple and Amazon managed to record fourth quarter revenue of more than $100 billion, a first for both companies.

It's an identical chart for profits of technology companies (up and to the right).

And while there has been heightened speculation that can only be described as "euphoric" in a select group of stocks (i.e. GameStop), it represents just a drop in the bucket for the overall market.

There are no doubt pockets of froth in unprofitable companies that have a strong narrative behind them and a cult-like retail investor base, but that froth and speculation hasn't spilled over into the greater market.

Still, based on the traditional forward price to earnings ratio, stocks aren't cheap. They're well above their historical average (22.1x today vs. 25 year average of 16.6x), but also below their 2000 peak of more than 24x.

But some perspective is necessary.

In 2000, interest rates were at about 6%, meaning investors who were concerned about valuations had a viable alternative to the high-flying stock market.

Today, Interest rates are near zero, meaning bond investors are barely keeping up with inflation unless they buy riskier corporate/junk bonds.

Diminishing investment options for investors that are seeking a decent return on their cash often results in an increased premium for stocks.

And there's no sign the current interest rate environment will change anytime soon, given that the Fed has signaled they won't even consider raising rates until 2023 as they hope to extend the pandemic recovery.

Fiscal policies under a Biden administration also remain constructive for the economy and stocks as stimulus and infrastructure deals begin to materialize.

Meanwhile, corporate profits are more than triple today than what they were at the height of the dot-com bubble. They're showing no signs of slowing down, are growing at a faster pace than in 2000, and they're durable.

But most importantly, stocks deserve the current valuation premium they trade at, if not higher, because the outlook is incredibly bright.

An accelerating COVID-19 vaccine rollout (combined with a rapid decline in daily COVID cases) is increasing the likelihood of a strong economic recovery, and consumers, many of them with a refreshed outlook on life and heightened cash levels, are going to spend like there's no tomorrow.

At the same time, a convergence of fast growing, sci-fi like technologies are on the verge of adoption, which will increase economic output and productivity at a level not seen since the industrial revolution.

Those technologies include artificial intelligence, autonomous driving, electric vehicles, advanced robotics, and 3D printing, among others.

Finally, US demographics suggests there will be strong long-term demand for everything from US stocks to consumer goods, as the millennial generation enters its peak earning years and begins to buy homes and forms families. Gen Z is right behind them. Both generations are now bigger than baby boomers.

Ultimately, stocks are not in a bubble, and even if they were, they could stay elevated for a lot longer than most expect (i.e. years). That's why it's important to stick to your long-term investment plan regardless of the recent headlines.

Signs of a stock market bubble will be clear when the headlines above instead read something along the lines of "Why nothing can stop stocks from going higher" and "Buy buy buy!" — We're not there yet.

And to give you a sense of what path the stock market could take if a Roaring 20's like boom is upon us, take a look at the chart below, which overlays the stock market rally of the 1920's with the pandemic low in March 2020.

"History doesn't repeat itself, but it often rhymes." — Mark Twain

‍Do you know someone you think would benefit from our low-fees, $0 account minimums, and investment management services? We'd love to help! Refer a Friend

‍If you enjoyed reading this, you might enjoy previous writeups, including:

1. A Drive Across America
2. Becoming Warren Buffett
3. Return Of The Roaring 20's

Thanks for reading, and please reach out with any feedback or questions, especially if you are hesitant about investing in the current environment.